Steve Bloom’s background lies in dynamic management and stewardship of nonprofit organizations. Under Bloom’s leadership, in 2017 Portland Japanese Garden realized the completion of the $37 million expansion of the Garden and its facilities with the addition of a cultural village designed by renowned architect Kengo Kuma.

Bloom was awarded a 2008-09 International Affairs Fellowship by the Council on Foreign Relations, and in 2015 was the recipient of Japan’s Foreign Minister’s Commendation awarded by the Japanese Ministry of Foreign Affairs in honor of the seventieth anniversary of the end of WWII. In 2022, Bloom was given the Kaneko Kentaro Award by the America-Japan Society  in recognition of his longstanding contributions to grassroots exchanges between Japan and the United States. Bloom also led the effort to create the North American Japanese Garden Association (NAJGA) of which he served as its founding Board President.

In 2022, Bloom led the launch of the Japan Institute, a sibling organization of Portland Japanese Garden that has the goalof being a leading global platform around shared ideals and experiences with Japan through conversations about peace, beauty, and connection to nature. Innovative programs, global partnerships, and experiential education are the hallmarks of the Japan Institute’s three centers: the Global Center for Culture & Art, the International Exchange Forum, and the International Japanese Garden Training Center.

Under Bloom’s leadership, Portland Japanese Garden is now celebrated not only as the most authentic Japanese garden outside Japan, but also the largest foreign-based Japanese cultural center in the world. Recently the Garden received the highest honor bestowed on any public Garden, the 2020 Garden Excellence Award, awarded by the American Public Garden Association as selected by its peers of 600 gardens across 20 countries.

Previously, Bloom served as President of the Honolulu Symphony, and Executive Director of the Tacoma Symphony. He received his BA from the State University of New York’s Crane School of Music and a Social Innovation Fellowship in nonprofit management at the Stanford University’s Graduate School of Business.

A fourth-generation Japanese gardener from southern Japan, Uchiyama is devoted to fostering relations between Japanese gardens in Japan and those outside of Japan. He has been involved in the development of the North American Japanese Garden Association (NAJGA) and serves as a Charter Member of its board and programming board.

In 2022, Uchiyama was awarded the Foreign Minister’s Commendation from Foreign Ministry of Japan, one of the highest honors bestowed by the Japanese government, given to those with outstanding achievements in international fields. In 2022 he was also honored by the Oregon Chapter of the American Society of Landscape Architects, which hailed him as “an internationally recognized master artisan of the practice of landscape architecture.”

Uchiyama has taught landscape design courses and lectured on Japanese gardening at colleges and public gardens throughout the United States and Japan. His writings have been featured in Garden Design, Fine Gardening, Inspired House, Luxe Magazine, as well as professional journals in Japan.

He is a registered landscape architect with a BLA and MLA from the University of Illinois. His representative projects include renovations of the Osaka Garden; the site of the 1893 Great Columbian Exposition at Jackson Park in Chicago (from 2000 until present); and the Shofu-en of the Denver Botanic Gardens (2001 – 2012). Most recently, he completed the Shoun-Kei Japanese garden at Sarah Duke Gardens at Duke University (2015). At Portland Japanese Garden, Uchiyama worked closely with Kengo Kuma to create and integrate new garden spaces into the Cultural Crossing expansion. The two have continued to work together, collaborating on the new Rolex Headquarters in Dallas, Texas and other projects in the US. 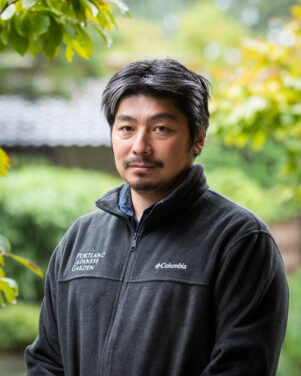 Hugo Torii is the Garden Curator at Portland Japanese Garden, making him the 10th to take on this critical role since the Garden opened in 1967. As Garden Curator, Torii helps to keep Portland Japanese Garden true to its original intent and design, while also allowing it to grow and evolve. Torii oversees a team of gardeners and in working with the Chief Curator, is actively involved in the process of all Garden maintenance, keeping in mind the short term needs as well as longer term implications.

Prior to becoming the Garden Curator, Torii spent more than 2 years as the Director of Grounds Maintenance, overseeing the physical aspects of Portland Japanese Garden, its maintenance, and development. In this role, he started several projects that he continues in his current role as the Garden Curator, including building a training structure for the gardening team and starting an exchange program with gardeners from other notable gardens, to continue to position Portland Japanese Garden as a leader and key resource in preserving the art of Japanese gardening.

With a master’s degree in Landscape Design from the Kyoto University of Art and Design, Torii brings a background of studies and experience in both Japanese gardens, Japanese aesthetics in horticulture, and floristry. Prior to his roles at Portland Japanese Garden, Torii spent over three years at Peter Berg Landscape Design in Rheinland Pfalz, Germany, and 12 years at the prominent UEYAKATO LANDSCAPE Co. Ltd., as a gardener and landscape architect in Kyoto, Japan. During this time, Torii managed projects including the Japanese garden and greeneries for the nearly 60-acre Keihanna Commemorative Park, the strolling pond garden at the Yosui-en Garden, and annual maintenance of pine trees at Nijo Castle, a World Heritage Site listed by UNESCO. 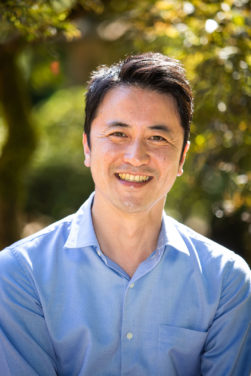 Akihito Nakanishi is a cultural leader and public diplomacy expert with 19 years of experience in government relations, public communication, artistic exchanges, and cultural programming in Japan.

For 10 years, Nakanishi served as the Cultural Affairs Specialist at the United States Embassy, Tokyo, where he oversaw a wide spectrum of embassy involvement in cultural, creative, and educational activities designed to enhance mutual understanding between the United States and Japan. In addition to being the principal advisor to the Mission’s Cultural Attaché, he also served as a cultural advisor to Ambassadors with the responsibility of directly overseeing some of the Ambassadors’ cultural and education projects such as “Ties Over Time” (under Amb. John V. Roos) and “International Poetry Exchange Project” (under Amb. Caroline B. Kennedy).

Prior to working for the Embassy, Nakanishi worked for three years as Program Director at one of the major media corporations in Tokyo, followed by a role as Exhibition Director for four years at a family-owned museum. Drawing upon this extensive knowledge of the arts, he has worked as an independent art director, producing exhibitions and art fairs (Art Photo Tokyo 2016), co-producing literary events and festivals (Tokyo International Literary Festival, 2012-2018), writing dossiers for arts events in specialty publications and newspapers (Bijutsu Techo, Kobe Shimbun), all while running his own non-profit organization for regional revitalization and youth empowerment, echovisions. 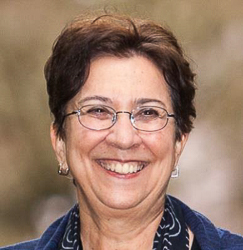 Diane Durston is a writer, lecturer, cultural consultant, and educator, who lived for 18 years in Japan.

From 2007 to 2018, Durston was the Arlene Schnitzer Curator of Culture, Art & Education at Portland Japanese Garden, where she has been instrumental in expanding the Garden’s reputation as a center of cultural learning, laying the groundwork for the Garden’s new International Institute for Garden Arts and Culture. Upon her retirement in 2018, Durston assumed the role of Curator Emerita.

She is the author of three books and numerous essays and articles on the culture and traditional way of life in Kyoto. Her book Old Kyoto is now in a second edition and 15th printing. The New York Times has referred to it as a “Japan travel classic.” Her other books include Kyoto: Seven Paths to the Heart of the City, an introduction to historic preservation districts in Kyoto. She has also contributed essays to the Encyclopedia of Japan, Japan, The Cycle of Life, and the Japan Crafts Sourcebook. Her most recent book, Wabi Sabi: The Art of Everyday Life was published in 2006.

As a cultural consultant, she has developed on-site cultural programs in Japan introducing Japanese art, culture, religion, history, and gardens for such organizations as the University of Pennsylvania, the Whitney Museum, the Yale Galleries, and the Metropolitan Museum of Art. Since returning to the US in 1996, Durston has served as Special Programs Producer for the National Gallery of Art in Washington, DC, where she produced month-long performing arts festivals in conjunction with the openings of two special exhibitions “Edo: Art in Japan 1615–1868″ in 1998 and of “Golden Age of Archeology in China” in 1999. From 2002–2006, Durston was Director of Special Projects and later Curator of Education at the Portland Art Museum. 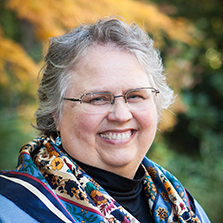 In her role as Deputy Director, Cynthia Johnson Haruyama coordinates the work of all of the Garden’s departments and oversees implementation of the Strategic Plan, including new long-term initiatives. She also liaises with other cultural institutions and Portland’s city bureaus, and serves as Portland Japanese Garden’s representative to the Explore Washington Park Board of Directors in the role of Vice Chair.

Previously, Haruyama has been in senior management positions for several of Portland’s public gardens. She served as the Executive Director of Lan Su Chinese Garden (2008 – 2012) and Executive Director for Hoyt Arboretum (2001 – 2008). At both gardens, her first task was financial turn-around followed by a focus on visitor experience, long-range planning, capital renewal and replacement, and Board development. At both Lan Su Garden and Hoyt Arboretum, Haruyama re-started moribund fund development programs and raised significant funds for annual operations and major capital projects.  Haruyama’s interest in non-profit management and public gardens began after practicing corporate and business law with Davis Wright Tremaine followed by her role as General Manager and Sales Director for garden equipment manufacturer, A.M. Andrews Co.

In 2001, she and her family lived for a year in her husband’s hometown of Kagoshima, Japan and travelled extensively in Japan, especially in southern Kyushu. Throughout her time in Japan, Haruyama visited many of Japan’s famed gardens, and observed regional variations in gardens ranging from Kyoto to Kyushu and the Ryukyu islands. Haruyama graduated with honors in East Asian Studies from Princeton University. Her law degree is from Columbia University in New York. 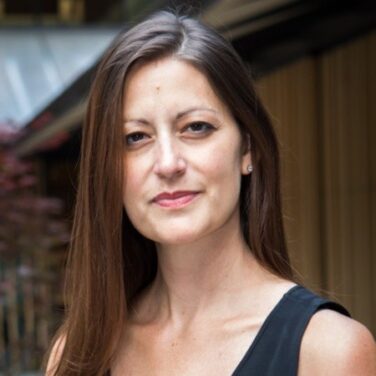 Lisa Christy is a specialist in understanding audiences and how best to communicate with them. She serves as the Chief External Affairs Office at Portland Japanese Garden, overseeing Membership, Marketing, Communications, and Community Relations. Ms. Christy came to the Garden in 2014 as Director of Marketing and Communications at an auspicious time in its history: the organization was about to embark on an historic expansion led by world-renowned architect, Kengo Kuma.

During her tenure at the Garden, Lisa Christy grew the department seven times over, oversaw a comprehensive rebranding for the Garden, and directed the Garden’s expansion communications plan that yielded national & international press. She has expanded the organization’s community access programs for underserved populations, established a comprehensive digital strategy, and has driven record-setting admission for the Garden year over year – even during construction.

Prior to working for Portland Japanese Garden, Christy worked at premiere advertising agency Wieden + Kennedy for nine years where she helped guide award winning advertising campaigns such as Old Spice’s “The Man Your Man Could Smell Like” and Proctor & Gamble’s “Thank you, Mom” Olympic campaign, in addition to Starbucks, Sony, and Travel Oregon. Christy also worked at OLSON advertising agency in Minneapolis, MN and Bernstein-Rein in Kansas City, MO.

As the daughter of professors in education and advertising, Christy believes passionately in giving back to the industry through education. In addition to her agency work, she was a full-time instructor at the University of Tennessee where she was awarded Lecturer of the Year. She has also consulted and guest lectured on marketing, communications, and media strategy for universities and professional groups throughout the United States. Christy holds a bachelor’s degree in communications from Middle Tennessee State University and a master’s degree in advertising from Michigan State University. She currently lives in Portland with her husband and son who loves baseball.