We are pleased to welcome two musical guests, Masahiro Nitta and Shintaro Fukuda to the Garden. Together known as the Wacocoro Brothers, we anticipate a rousing and unique musical performance using traditional instruments including the three-stringed shamisen and taiko drums.

Born in Sapporo, Masahiro Nitta was influenced in music by his father, Nitta Ryu Iemoto “Hiroshi Nitta”. He started the Tsugaru Shamisen at the age of 14 and won the junior and senior high school students at the 1998 Tsugaru Shamisen Tokyo Tournament seven months later. After that, he won the national tournaments in 2000, 2001 and 2002. While working as a collaboration shamisen player who demonstrates the charm of the Tsugaru shamisen in collaboration with various musical instruments using his original researched technique, he is active in a wide range of activities, including composition and arrangement of stage music and film appearances. 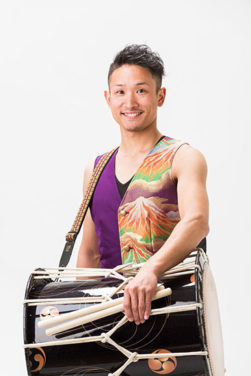 Shintaro Fukuda was born in Anping-cho, Hokkaido. He started playing Japanese drums at the local taiko group at the age of 10, and was enrolled in “Kodo” for three years from the age of 18. He began solo activities around Hokkaido in 2006. He finds his style in the relationship between drums and dance, and new styles that arrange dance music from Africa, Brazil, and Asian countries will be very successful everywhere I go. He plays actively at educational institutions such as schools and kindergartens, he also focuses on training successors such as national junior contest teams and overseas teams.