The mere act of making a garden implies a future in which plants will reach fruition and results will be enjoyed. Gardening is inherently hopeful as a series of affirmative, assertive acts—the seeds will germinate, the plants will enjoy adequate rain and sunshine…and we will survive to see all that.

Gardens aren’t a luxury, not a mere decoration to be enjoyed only in the most perfect of times. In fact, it’s the opposite – gardens are something that meet a fundamental human need in the worst of times.  The act of enclosing a space and cultivating life in it implies strength, hope, optimism, a sense of community and the will to be the best possible version of ourselves.

During World War II in the western United States, gardens played a transformative role at camps where Japanese-Americans were incarcerated, like Manzanar. There, amid barren and inhumane conditions, detainees built gardens that the National Park Service — which now maintains Manzanar as a National Historic Site — describes as “small oases of beauty and serenity within the harsh prison camp surroundings…Remarkably, internees asserted and emphasized their Japanese heritage in the gardens precisely when they were being confined for that heritage.” 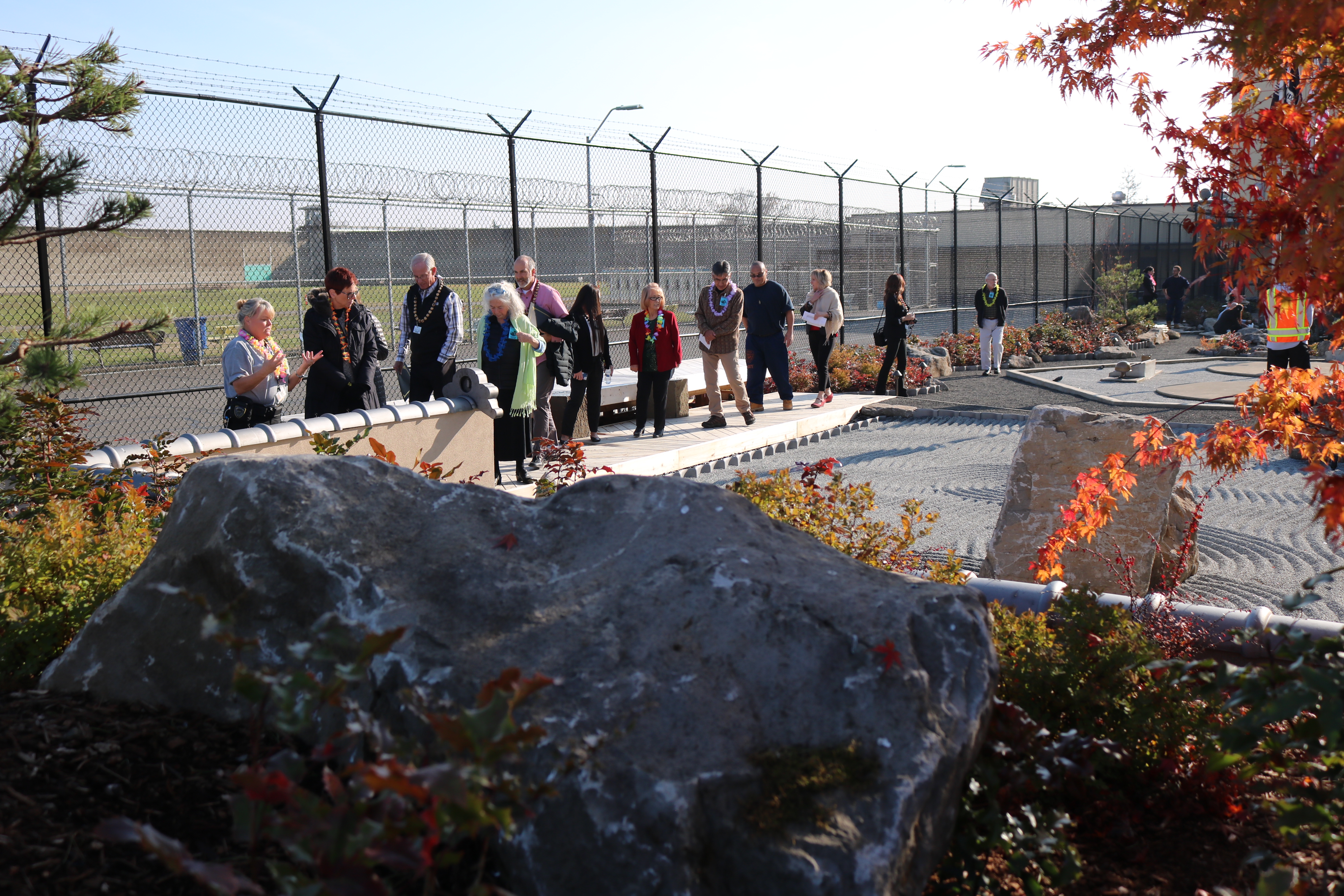 That same enduring and beautiful heritage and its ability to help humans find solace in the bleakest of hours is now lending itself to the first Japanese-inspired prison garden in the United States at the Oregon State Penitentiary in Salem, Oregon. The project, five years in the making, opened in early November and was led by prolific Japanese-American designer Hoichi Kurisu in collaboration with several inmates of the maximum-security facility. 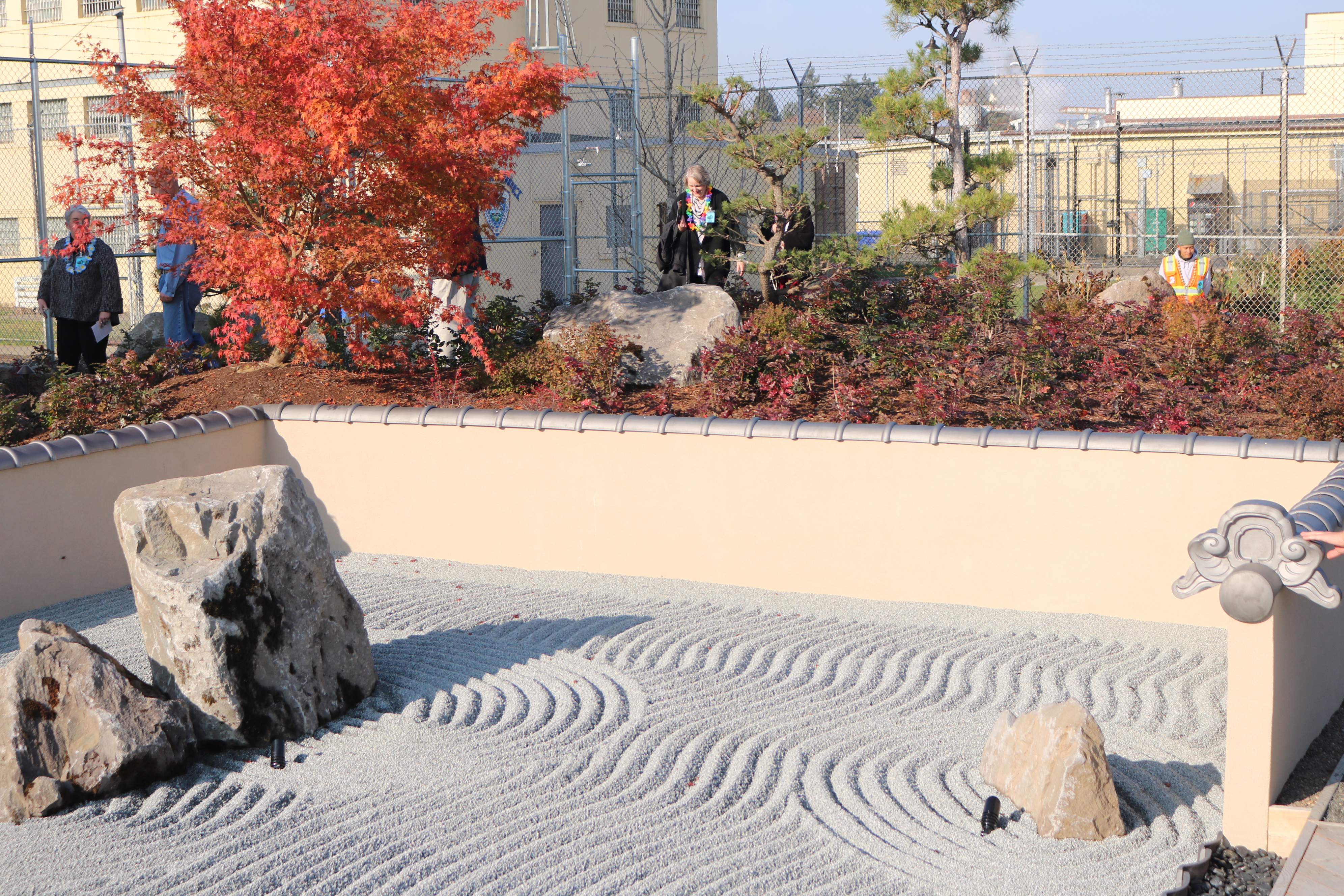 “This garden has given me a sense of meaning and purpose,” said Johnny Cofer, one of the inmates leading the garden team. “Some of the guys here who volunteered said that they had spent more than 50 years never doing a single meaningful thing. It was something we could call home. And a way that maybe we could become the people our parents wanted us to be.”

Kurisu, who early in his career was director of Portland Japanese Garden, is known for his transcendentally lovely hospital healing gardens and public Japanese gardens like  Morikami in Delray Beach, Florida. Kurisu himself contributed not just as a designer but gave material support and hands-on labor to the project.

The garden, with features including a gate, pine trees, a sand and stone garden, a koi pond and a bridge, is maintained through privately raised funds at no taxpayer expense. About 200 volunteers including the prison community worked for 96 days, clocking 12,000 hours and raising $200,000 for the construction.

What will this garden change? Ninety-five percent of the inmates at OSP will, at some point, be released back into society. It matters not just to them but to all of us how they rejoin us – as damaged souls with no options but to return to crime, or as people with newly acquired skills and ideals with something to contribute. 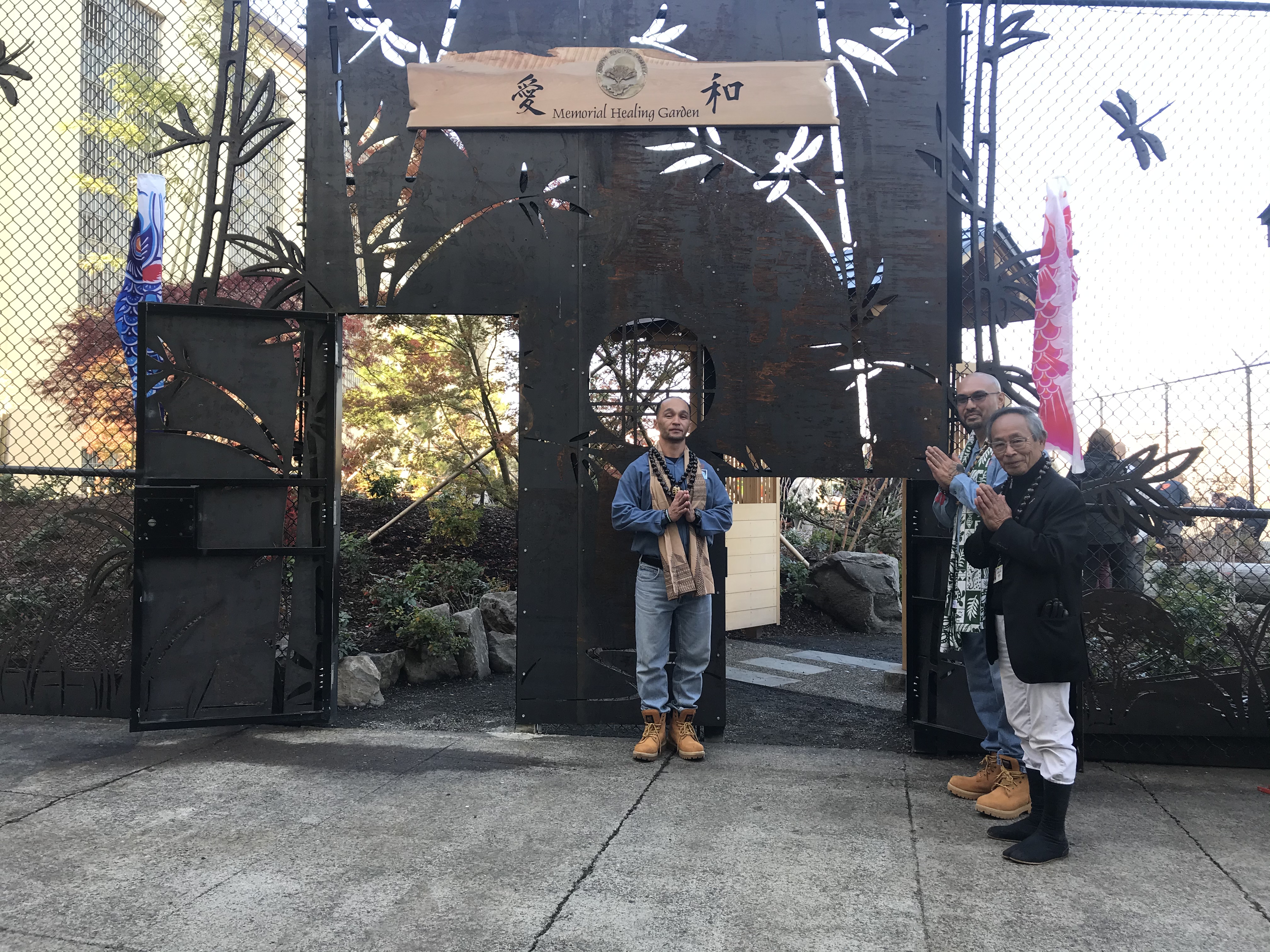 The Japanese concept mitate-mono means to see an object anew – for a thing to gain a new meaning and purpose.  There is such a thing as mitate-mono of human beings. The same hands that once visited terrible harm on another person can become the hands that plant and carefully prune a pine tree. The mind that once decided to commit acts of violence can become the mind that chooses to make a place of tranquility and restoration. And the heart that once harbored uncontrollable rage can become the heart of the gardener: patient, humble, and selfless enough to see itself as only a small part of something greater that will outlast it. A garden can do that.

Every garden has the potential to have a therapeutic effect on the one who tends or visits it. But the Japanese garden tradition has particular qualities that make it ideal for healing or therapy:

Sense of enclosure:  Paths, gates, fences, and other elements guide and shape the visitor’s experience, focusing attention and directing energy at strategic points and granting the visitor a strong sense of arrival. The garden’s edges are well-defined, with techniques such as hide and reveal and borrowed scenery contributing to the effect of being in an enclosed space with views.

Seasonality: Nature is never finished.  Ephemeral changes mark the passing of the seasons in the garden: snow on the top of a lantern, stone paths gleaming with spring rain, the first flowering of the cherries or azaleas. The sense of constant change and the cyclical nature of life is reassuring and keeps the visitor engaged.

Sensory stimulation: A Japanese garden embraces the senses and spirit. The sound of water, a path whose flow changes to slowly shift focus to a beautiful view, the smells of gravel, water, plants and moss that subtly change through the year can all help evoke peaceful memories.

People-plant interaction: Learning traditional pruning and other techniques can offer rewarding results over time as the gardener and garden shape each other. The garden is always in a state of becoming – thanks to nature and the constant presence of skilled hands and heart.

The Garden is proud to have helped support the OSP garden project through hosting Kurisu as a guest lecturer, hosting a documentary film crew, providing learning materials, and advocating for the project in online media.