From large projects to small, the gardening team at Portland Japanese Garden has had a busy year maintaining the life of the Garden with updates and additions. Many of the improvements this past year were major yet rarely noticed by visitors.

“I would say that irrigation has been the biggest Garden improvement, primarily in the Natural Garden this past year.” 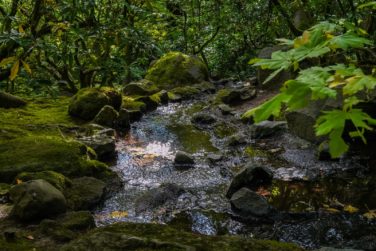 “We’ve been working on irrigation primarily for the past three years, but this past year was a difficult one; reconnecting the line from the Eastern Overlook behind the Pavilion down to the lower part of the Natural Garden,” said Sadafumi Uchiyama, Garden Curator.

The entire system is underground, and Uchiyama said serious repairs were made within the last year. Because the trees are so big and the paths are paved, the gardeners can’t just dig trenches. The only way to fix the irrigation is to go underground via a direct bore. “It’s an old system so we replaced the whole galvanized steel piping and there is still a bit left that will be done next year. Next year pretty much concludes the major overhaul of that line,” he said.

The gardeners have been dealing with older galvanized steel pipes. Some of those pipes have been in place since the site was the old Portland zoo. “Since every year there is slight land movement in parts of the Garden, especially in the Natural Garden, pipes can break and there are cumulative effects,” said Desirae Wood, Garden Asset Manager. “What we’re doing is making repairs with longevity in mind and with materials that will last.”

Wood said erosion happens naturally, from people’s footsteps or from water. The team spent the last year bringing in more soil where it had worn away. Sometimes the team redirects the water, sometimes they capture it. Erosion is constant from nature and requires ongoing attention. 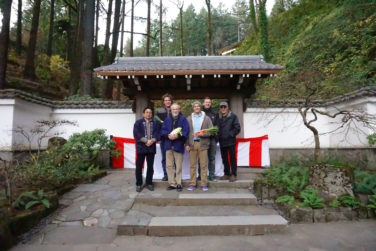 Built in Japan, the Garden’s 200-year-old Antique Gate was reassembled and situated in its present spot in 1976. For years, it has acted as a transition from the busy outside world to the tranquility of Portland Japanese Garden.

During an ice storm two years ago, a large branch fell and damaged the Gate’s roof. Close examination revealed signs of additional rot and the Garden took this year to make complete repairs.

The maintenance, performed by master Japanese woodworker Dale Brotherton, will now help the gate last another 50 years. Brotherton added brand new roof tiles, custom made for the structure in Japan.

Brotherton also made repairs to a small entry gate in the outer Tea Garden. Guests with a keen eye will notice that structural damage was done after someone jumped up, swung on the gate, and broke it. A new support has been added and it will be fully rebuilt in a few years.

“In general, the Garden is more than 55 years old and so the type of maintenance we’re doing in some ways has to shift for architecture (as well as plants, pavement, and infrastructure). You’re dealing with aging things and you’re having to bring in new replacements and make the necessary repairs. The maintenance becomes more complicated,” said Wood.

Donor panels in the Welcome Center 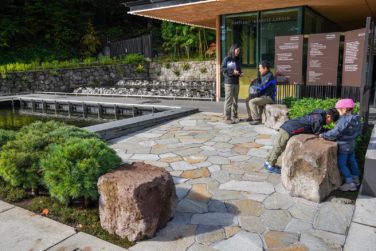 This year, the Welcome Center received a facelift. Uchiyama managed construction of the new stone mini-courtyard seating area. There are now five double-sided signs consisting of four donor recognition signs and a welcome and orientation sign. 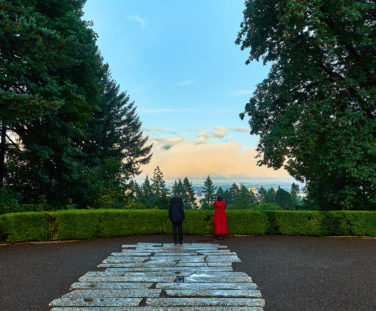 Frequent visitors of the Garden may have noticed that the paving stones were removed from the Eastern Overlook and the entire area was regraded. The intention was to make it easier for guests to move on even ground.

Twenty-six large stone pavers were repurposed and placed, both in the Chabana Garden and at the Garden shuttle turnaround. The shuttle turnaround was reconfigured with the paving stones, which now makes it easier for the shuttle to transport Garden guests up and down the hill.

“Regrading overall made the presentation of the Garden much better,” said Uchiyama. “Especially some regrading we did near the Flat Garden. That area is nice and crisp. The surface has to be smooth and nice with well-defined edges.”

Last season for the first time, all the pine trees in the Garden were worked on or pruned. Gardeners consciously targeted the specific seasons to mobilize, capitalizing on full staff and dry weather.

“For the past two and a half years, we’ve been working on pruning; the Garden was getting a bit overgrown,” said Uchiyama.

Portland Japanese Garden’s team of eight gardeners also did extensive work to redistribute irises on both sides of the zig-zag bridge, making sure the iris beds will get enough sunlight to bloom in the future and continue to delight visitors.

“We basically have two main garden areas now: a 56-year-old area and a newborn area. The newborn area has to be nurtured and we must encourage growth,” said Uchiyama. “The older part gets weaker and must be nurtured in a different way. Maintenance here is now broader and much more complex.”