From the Archives: This post was originally featured in the May 2016 edition of The Garden Path magazine.

But, artist Ryan Neil said he’s loosened up over the years on the issue of pronunciation.

“Bonsai” is a Japanese word, but the context for cultivating trees in shallow containers originated in China as an art form known as penjing. Penjing was a practice rooted in Buddhism that connected man to the environment and brought the spirit of wild places closer to home. It migrated to Japan with Buddhism, as a spiritual practice, and slowly evolved into bonsai under the influence of Japanese culture.

That connection of man to the environment is at the heart of the second Art in the Garden exhibition of the year (May 21st through June 19th). Titled American Bonsai: The Unbridled Art of Ryan Neil, the exhibition focuses solely on American species of trees, designed to directly reflect the character of American culture and the landscapes in which our culture has been formed.

“Much the same way penjing evolved into bonsai, we are witnessing another evolution in the way we use these tiny trees to express and embody our own American landscape and the spirit of American culture,” said Mr. Neil. 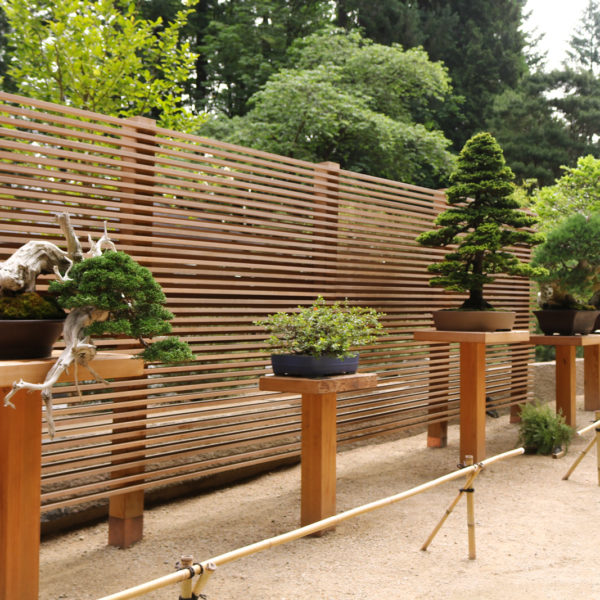 View Bonsai at the Garden

The Portland Japanese Garden partners with local bonsai practitioners in Portland and from around the region to showcase a variety of bonsai on the Ellie M. Hill Bonsai Terrace.

Ryan Neil was born and raised on the Western slope of the Rocky Mountains in Colorado. He became fascinated with the landscape and its fantastic array of wind-swept trees. Mr. Neil obtained a degree in horticulture then went to Japan where he undertook a six year apprenticeship with Bonsai master Masahiko Kimura, the most revolutionary figure in contemporary Japanese bonsai.

In 2010, Mr. Neil settled in Oregon to begin cultivating his art form of bonsai. His company Bonsai Mirai is an innovative American bonsai garden and school—a creative place that reflects the unbridled culture of its new home in the American West.

“Fifty percent of the creation of a beautiful tree comes not from the artist, but from the tree’s response to the artist. I’m only a small part of the greater conversation that is going on continually in each tree’s life that I have a hand in,” said Neil.

Mr. Neil’s work channels the craftsmanship and discipline of this ancient Japanese art form while reflecting the untamed landscape of the American West. The exhibition will feature about a dozen of these living art pieces with trees ranging from 100 to 500 years old.

“I’ve learned over the years that I can get where I want to go with a tree much faster if I let the tree dictate the pace and the direction,” said Neil.

When asked why she wanted to showcase Mr. Niel’s work, Diane Durston, the Arlene Schnitzer Curator of Culture, Art & Education, said, “Bonsai Mirai bridges cultures with Ryan’s innovative approach to the art of bonsai. The word mirai (pronounced mee-rye) means “the future,” and that’s clearly where he is going!”

A special thanks to exhibition sponsor Vasek and Travers Hill Polak and family, in honor of the Ellie Murrah Hill Bonsai Terrace opening in the new Cultural Village of the Portland Japanese Garden in 2017. Additional support provided by The Autzen Foundation.