This summer brings an exhilarating new direction for the Art in the Garden series as we explore the flamboyant and fanciful traditional performing art of Kabuki through an exhibition of seven authentic costumes on loan from Japan.

Originating in the 17th century, Kabuki continues to flourish today at the Kabukiza Theater in Tokyo. The space was re-designed in 2013 by Kengo Kuma by commission of the Shochiku Company.

Kabuki is said to have begun in 1603 when a young woman named Izumo no Okuni began performing a new style of dance for the townspeople along the dry riverbeds of Kyoto. To “protect the public morality,” the Tokugawa Shogunate issued a ban against female dancers later in the 17th century, resulting in all-male performances of both male and female roles that continues to the present day.

The word Kabuki歌舞伎 literally refers to the lively song and dance performances that brought to life the exuberant culture of languid kimono-clad courtesans and their swaggering downtown companions exquisitely depicted in ukiyo-e woodblock prints.

The new urban culture that developed around Kabuki theater inspired a lively popular culture among the merchant class in the entertainment quarters of both Kyoto and Edo (now Tokyo). It fostered exciting new directions in the design of textiles, painting, and printmaking. This included the creation of the “playbills” and posters we have come to know as ukiyo-e, pictures of the “floating world” depicting life among the actors and courtesans who inhabited the geisha quarters of both cities.

The Kabuki stage provided an exciting new form of entertainment with new music and dance performed by famous actors, who were (and continue to be) the wildly popular celebrities of their day. The brilliantly hand-dyed and lavishly embroidered silk costumes exploded on stage in a riot of color creating a revolution in the world of color and design, which continues to be celebrated internationally.

For those who associate Japanese aesthetics with the subtle and understated wabi taste of tea ceremony, the bold designs and brilliant colors of the world of Kabuki may come as a surprise to those who think of Zen and wabi-sabi when they think of Japan. 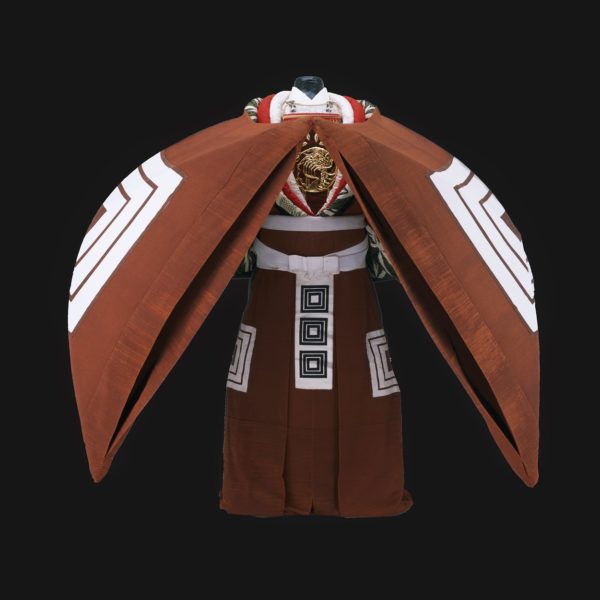 Kabuki: A Revolution in Color and Design

This summer will bring an exhilarating, new direction to the Art in the Garden series when the Garden explores Japan’s most flamboyant and fanciful performance art through seven elaborate costumes in the exhibition, Kabuki: A Revolution in Color and Design.

The shitamachi downtown culture that arose in the 17th century from the denizens of the “floating world” of Edo (now Tokyo) shatters all such illusions! The ladies of the entertainment quarter became the fashionistas of their day, a coveted departure from the more reserved attire of the upper classes. The culture merchant class reflected urban life in the streets of Edo, filled with romantic adventures and life and death battles between good and evil.

Kabuki: A Revolution in Color and Design features a selection of authentic costumes from two of the most famous plays in the Kabuki repertoire—Sukeroku and Shibaraku.

Sukeroku is named after the dashing rogue who visits the Yoshiwara brothel district in old Edo in search of long-lost and treasured sword. His iconic costume and make-up have become a symbol of the swashbuckling spirit and the devil-may-care flavor of life in the entertainment quarter. Sukeroku is in love with the beautiful courtesan Agemaki, whose costume is without a doubt the most stunning in the Kabuki repertoire. Agemaki holds the secret to the location of a sword that Sukeroku has been sent to find, and the story unfolds over two hours of colorful performance.