A Symbol of Peace: Healing Wounds from War

When the Second World War came to an end in 1945, many painful scars were left behind. In the years following the war, anti-Japanese sentiment in Portland and the United States was still very real for many, the wounds from the war had not healed.

Less than ten years after the war ended, the first Portland-bound commercial ship from Yokohama, Japan, pulled into the Port of Portland on a peace mission. The ship was carrying a granite snow-viewing (yukimi) lantern from the city of Yokohama.

Inscribed with the words “Casting the Light of Everlasting Peace,” and later called the Peace Lantern – it was a gift to the city of Portland from then Mayor, Ryozo Hiranuma, and the city of Yokohama. It symbolized the first step in a new relationship between Yokohama and Portland. For the first time since the war, many Portlanders started to become re-energized about the idea of once again having a relationship with Japan, both culturally and from a business standpoint.

“All of it happened in stages. It didn’t happen overnight. Eventually, over time and through this Garden, the people of Portland began to understand the people of Japan better,” said Stephen Bloom, CEO of the Portland Japanese Garden. 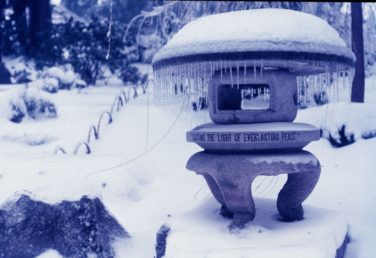 At first, the lantern sat on the riverfront where the public could enjoy and appreciate it as a symbol sparking conversations about Japan. A few years later, the lantern was moved to the Rose Garden. The lantern was brought to the Portland Japanese Garden when it opened to the public in 1967 and has sat along the Strolling Pond Garden ever since.

Professor Takuma Tono, the original designer of the Portland Japanese Garden, once wrote, “Among the Garden ornaments, probably there is nothing so impressive as the stone lantern which first attracts the eye of a visitor to a Japanese garden.” He felt lanterns do much to humanize the landscape.

It’s been 63 years since the peace lantern first arrived in Portland, establishing a friendship with the city of Yokohama. But like many friendships, time has a way of creating a distance and perhaps making us ponder the strength of its bond.

Last year, when Portland Japanese Garden Curator Sadafumi Uchiyama was visiting Japan, his Sensei Professor Isoya Sinji asked him for advice. Professor Sinji was selected as an advisor to the 33rd Annual National Urban Greenery Fair in Japan. The city of Yokohama had won the bid to host the three month event, which is highly celebrated in Japan. “Professor Sinji did not want just flowers in a garden for the Urban Greenery Fair. He was looking for a symbol; something tangible. He believes that landscape has everything to do with human culture and the acknowledgement of history. Over dinner one night I mentioned, ‘we have our stone lantern from Yokohama,’ and that was it. That is how it started. It was a very casual conversation,” said Uchiyama.

All of a sudden things start moving.

Professor Sinji presented the idea of a peace lantern to the city of Yokohama.

The city decided and Mayor Fumiko Hayashi supported the idea – to not just commemorate, but have an actual object made that would stay in a garden in Yokohama. City leaders decided to make a replica of the peace lantern.

Tetsuro Tanabe and Hideo Araki – both stone masons sent by the city of Yokohama – came to the Portland Japanese Garden to precisely measure the peace lantern. Two days later, with proper measurements in hand – Mister Tanabe and Mister Araki headed back to Japan to make an identical copy.  The city had hoped to display the peace lantern similarly to how it is displayed at the Portland Japanese Garden.

“They chose a small but old Japanese garden called “Higa-en” in Yokohama, right next to the baseball stadium. But the garden itself needed a lot of work and renovations before the start of the fair,” said Uchiyama.

Uchiyama who was in the middle of constructing the expansion to the Cultural Crossing at the Portland Japanese Garden at the time, agreed to help design to renovate the small garden in Yokohama. He designed the pathways, layout, a new gate, and helped decide where to display Yokohama’s new lantern.
On March 25th at the grand opening of the event, the city of Yokohama revealed its peace lantern to the city. It was widely received, especially when the story of its origin was told.

“It’s a small thing between two relationships and two cities. It’s really a relationship or friendship that has been revived. And now, it will only continue to grow stronger. Because after 63 years, all the old memories are back and that is a wonderful thing,” Uchiyama said.

The peace lantern at the Portland Japanese Garden, now with moss on its top – sits on the east bank of the Upper Strolling Pond and serves as a reminder of a deep desire for understanding and appreciation between two diverse cultures.

Now, 63 years later and nearly five-thousand miles away, an exact replica of the Portland peace lantern sits in a little garden in Yokohama, Japan casting the “Light of Everlasting Peace.”

“All of a sudden it becomes real again and our relationship is back today,” said Uchiyama.

Steve Bloom added, “The better we understand one another, the less likely we are to go to war with each other, and these peace lanterns symbolize that.”