Out on the western outskirts of Kyoto lies the quiet Buddhist temple of Koryuji — esoteric, often overlooked, and one of the oldest in Japan. It is the home of the Miroku Bosatsu, the Bodhisattva of the Future, wooden, simple, and timeless. A bodhisattva is an enlightened person who rather than entering nirvana, delays doing so out of compassion until all suffering beings have been saved. The Miroku Bosatsu of Koryuji is National Treasure Number One in the Japanese registry of historic objects—and, carved in 603 by a Korean sculptor, a foreigner like me.

A bodhisattva is an enlightened person who rather than entering nirvana, delays doing so out of compassion until all suffering beings have been saved.

In 1969, an overly zealous student overcome by the statue’s singular beauty suddenly leaped onto the altar to embrace this priceless treasure, breaking off its little finger, raised in a delicate gesture of thoughtfulness. The finger was repaired, the gently smiling figure forgave him and lived on to teach future generations the meaning of compassion. 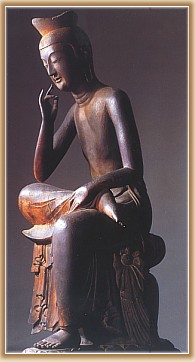 This fragile, diminutive Buddha sits pensively in a dimly lit corner of Kyoto today as he has for thirteen centuries, one elbow resting on his knee as he contemplates the future of life on this earth.

Delicately carved with the natural patina of aged wood, he speaks of impermanence and compassion. He sits, they say, and ponders ways to save mankind—a formidable task in any century. I learned to go visit him at times when I had grown tired of feeling lost and alone in a strange land.

In the presence of this little wooden image—small as it is—I felt a sense of awe at the vastness of the universe, of the eternal soul, not just of the Buddha, but of the thousand, of the million people who have stood right where I was standing, asking the same question, asking if indeed there IS a future. Yes, he replies, but you must have patience.

Diane Durston is the author of Wabi Sabi: The Art of Everyday Life, a collection of quiet meditations on life lived simply and with intention, and three books on Kyoto (all available online). You can contact her directly at [email protected]