On Feb. 12, the Garden teams up with OMSI to co-present the short film “Garden of Secrets.” A co-production of TeaLeaves and the University of British Columbia Botanical Garden, the film explores how botanical gardens can offer innovative ideas for solutions to the climate crisis.  A panel discussion follows, featuring Patrick Lewis, director of the University of British Columbia’s Botanical Garden.

The Garden’s Training Center director Kristin Faurest asked Lewis about the story behind the film:

Patrick Lewis: It came out of a breakfast with the heads of TeaLeaves.  We started talking about the plight of plants worldwide with one in five plants now threatened with extinction, about the climate crisis and the role of plants in resolving it, and the role of botanic gardens as living libraries to help combating climate change. We have to take an interdisciplinary approach and find ways for academia to work with the profit and not for profit worlds, and with the public.

KF: How is the role of botanical gardens changing and evolving?

PL: The origins of botanic gardens is in the west is physic gardens – for medicinal purposes. The Aztec empire had a botanical garden, other cultures had them too. Then there was the phase of economic botany – ‘what do you have in your country that I can take to my country?’ Now there’s about 2500 botanical gardens in the world with a known 400,000 species of plants. The latest figures show 1100 of those gardens hold 30% of all known species of plants. We function as libraries where we maintain material for research and exchange for researchers all over the world.

KF: How are the social roles of botanical gardens evolving?

PL: More and more we are talking about cultural diversity and the need to draw in people from a broader spectrum.  All gardens serve a social role in the sense of giving a natural environment within cities for people to meet and be rejuvenated.

KF: Can you give me some examples of new biomimetic ideas that have come from gardens?

PL: One of our co-researchers at Durham University is interested in water harvesting – a big concern for a large part of the world’s population. One of the ways of gathering water is to take moisture out of the air. Plants are very good at that. So we’ve looked at two plants – golden bamboo and western red cedar – and how their structure allows them to channel water. Flectofin – a patented and commercialized automatic system for opening and shutting windows to control sunlight and temperature – was based on the hinge that you find in the Bird of Paradise flower when a pollinator lands on its tip and bends it, causing the flower to open up.

KF: What do you want viewers of this film to come away with?

PL: We’d like people to understand that the botanic garden gives an opportunity to cross between science, botany, engineering, design – that living organisms can contribute to ideas for built design. There’s a classic example in Harare, Zimbabwe, where a major building was based on the design of a termite mound – allowing the temperature inside to stay constant and comfortable in an incredibly hot climate. At the simplest level, we would like them to go home with a sense there are all sorts of reasons why it’s important to maintain global biodiversity – that it has value in itself, but it’s also incredibly valuable as we address the climate crisis. 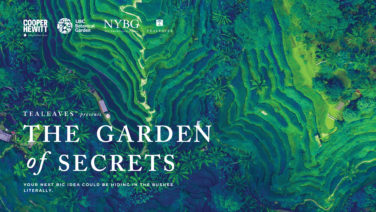 Don’t miss this important and astonishing discussion about how gardens can lead the way to a sustainable future. Tickets for “Garden of Secrets” are on sale from OMSI here: https://omsi.edu/calendar/the-garden-of-secrets-film-screening-panel-discussion